How Does “Bail to Avoid Jail” Work? 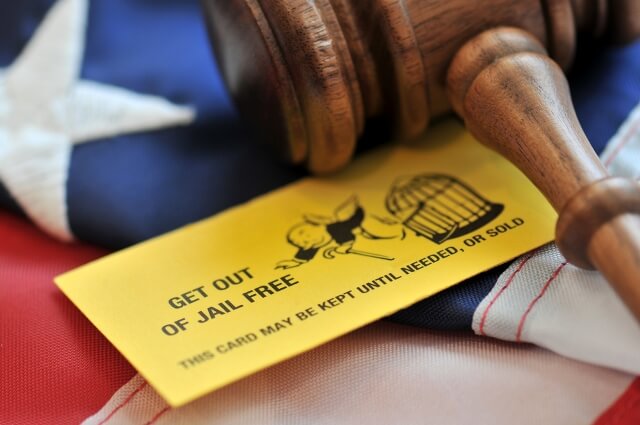 When one is arrested for committing a crime, he is innocent until proven guilty. However, the person will be put to jail and the prosecution moves on. Unfortunately, the criminal justice system takes a long time to resolve a case. In order to remain free while waiting for the court appearance, the accused person posts a bail.

While the presumption of innocence is true, the government has the duty to ensure those charged with crimes will show up in court. This is the main purpose of posting a bail — to ensure the accused person or the defendant will be present during the court schedule.

Once arrested, the defendant can give any of the following to be allowed to be able to avoid jail: check or cash, interest in real property, property, bond, or a payment waiver with the condition stating that defendant appears on court schedule.  The different forms, e.g., money, interest, property and bond, must be equivalent to the entire amount of the bail.

It is intended to ensure the defendant comes to court schedule. This is the reason why it should be high enough to achieve its purpose. However, the 8th Amendment (U.S. Const., 8th Amend.; U.S. v. Salerno, 481 U.S. 739 in1987) restricts anybody from establishing an excessive amount. Theoretically, it cannot be used by the government for raising money nor can it be used for punishing the defendant. Hence, the amount must be reasonable enough to serve its purpose which is to guarantee the defendant’s presence at the court’s appointed time.

The bail is refunded to the defendant if he finishes the case without missing any court appearance. It is an assurance that he/ she will show up during the schedule and he will not do anything against the law. If a court schedule is missed, the court can create a warrant of arrest and keeps the money.

Some counties and cities have their own schedule for defendants to know the standard bail amount for every crime. If you are a defendant, you can be set free once you pay the required amount. So, the first thing to do after an arrest is to ask for the bail schedule to know the amount so that you can be free once you have paid it.

If you couldn’t visit a judge right away, then you will have to spend time in jail. In some cases though, common crimes have a set amount so if you have cash, just pay the amount at the Sheriff Department so that you can avoid jail quick. Take note that jail officials cannot change the amounts in the schedule of bail so you are required to pay what is listed.

What Are Bail Bonds?

Bail bonds are used by defendants who don’t have enough cash to post the entire quantity of bail. A bonding company pays the court for it to ensure your appearance during the schedule. You pay a percentage of the amount which is usually ten or twenty percent depending on the crime committed. This is a payment for the company’s services and it will not be refunded to you unlike the bail amount. For example, if your bail is set at $45,000 then you are required to pay the bondsmen $4,500 so that you can avoid jail. Sometimes you will be asked for a collateral.

Although a payment of 10% or 20% of the entire amount for the bond may look like a desirable negotiation/ deal than paying the entire amount, it actually costs you more. After the completion of the case, your bonds are refunded with a little reduction for administrative fee. You cannot get back the amount you paid for the bondsman or bonding company because it is not refundable. If you have given a collateral, you will also provide the company the right in the property and they can cash on the interest when you fail to appear during the court hearing.

The company takes care of the bond and assures the court that you will be around for the court appearance. When you fail to come, the judge will revoke the bond and issue a warrant of arrest. The company will be at risk of losing the bond and as a result, it will hire bounty hunters to search you and seize the collateral property you have put up for your bond.

How To Reduce It

The bond may be lowered for reasons such as job, school, elderly care, medical expenses, and other good reasons. However, prepare all the money you can for the bond before you ask your attorney to request for a reduction. Ensure you can present something as your bail.

Getting yourself out of jail without cash

Other reasons that a judge grants ROR’d are the following:  The defendant committed a lower level crime or when the jail doesn’t have enough space. This is the only “get out of jail for free” opportunity but make sure you don’t miss a court date otherwise tell your attorney right away before you will be thrown back into jail.

If you are in need of a company to take care of your bail needs, Affordabail Bail Bonds in Connecticut is a good choice. It is a licensed bonding business with qualified staff who are knowledgeable and experienced in what they do. You may visit their website at Affordabail.net or call them at telephone number (860) 866-5434.